While preparing the UAT v.3.1.0 release, it became apparent that the existing versioning and release documentation did not fit the workflow for the UAT. Reflecting on the UAT releases in the three years since this guidance was originally written, we’ve produced updated documents that align better with the versioning and release cycle of the UAT.

The UAT will continue to use version numbers inspired by Semantic Versioning, but features such as tracking backwards compatibility and functionality that are of core importance to software packages do not apply to data products such as the UAT. As such, the guidelines for deciding what constitutes a major, minor, or patch release has been re-written to better reflect the actual process of releasing new versions of the UAT.

Likewise, the Release Cycle has spun off into its own document, and has been greatly expanded to include a schedule based on the real work of updating the UAT over the last few years. The hope is that this Release Cycle document can help inform authors and users of the UAT about the process of updating the UAT, while the Curator will be able to use it to help guide how suggestions are evaluated and to alert the community of upcoming changes in a timely manner.

We expect these Versioning and Release Cycle documents will be revisited and revised in the future as needed.

Although the website has been pretty quite, a LOT of work has gone into the UAT since I last posted an update nearly one year ago.  This is a short summary update of the status of the UAT project; expect more details to follow.

A few weeks ago we published version 1.1.0 to Research Vocabularies Australia (RVA), a controlled vocabulary discovery service from the Australian National Data Service (ANDS).  We’ve been collaborating with ANDS for the better part of 2016 and are happy to have the UAT publicly available on their platform.

From the RVA platform, you can download the full UAT in different file formats, or use the API function to connect the UAT to your applications and websites.

Julie Steffen, Director of Publishing for the American Astronomical Society, has formed a Steering Committee to manage the operation and direction of the UAT.  The Committee meets regularly, about once a month, to discuss topics such as outreach, funding, development, and licensing.

More information about the Committee can be found on the “Governance” page under “About Us.”

Alberto Accomazzi (SAO/NASA ADS) has been developing a versioning scheme based on the Semantic Versioning standards for the Unified Astronomy Thesaurus.  The existing versions found on GitHub have been renamed to follow the new scheme, and this versioning system will be used moving forward.

A defined versioning system will allow us to post useful patch notes, to describe the kinds of changes that have been made from one update to the next.  Once finalized, the versioning documentation will be made available.

Additionally, we are examining the process of providing deltas (a file containing only the changes from one version to the next) as part of the update cycle.

A persistent issue for updating and managing the UAT over the years has been keeping track of suggestions, contribution, and the decisions regarding them. Our first temporary solution consisted of emails sent directly to me that I filed away into a folder until I was able to act on them. Unfortunately, this system was equivalent to a black hole. Information goes in, but it’s hard to tell what, if anything, is coming back out.

At a recent Steering Committee meeting, the Issues feature on GitHub was suggested as a way to manage and track the various suggestions. GitHub also has the added benefit of being an open system; anyone can see the current suggestions under discussion and create an account to make a contribution.

A few weeks ago I began the work on transferring comments to the UAT Issues tracker, and I would welcome anyone with a suggestion or idea for the UAT to add it to the list.

More documentation detailing how we will be using the Issue tracker will be forthcoming.

Over the last year, the Sorting Tool was developed by Sarah Weissman (STScI) and myself as a way to give our users a visual overview of the UAT and make suggestions directly in the hierarchy.

Although this is a very powerful tool, currently the system submits its feedback as an email directly to me, which I plan to duplicate as an Issue on GitHub.  Pushing feedback from the Sorting Tool directly into the Issue tracker is being examined.

Updates have been made across the UAT website, focused mainly on cleaning up the existing content and tidying up the navigational menus.

With the addition of the ANDS vocabulary server, I’ve removed the old hierarchical and alphabetical browsers, the UAT Explorer, and the UAT dendrogram view.  These tools were difficult to maintain, requiring manual creation of files and uploads to the website.  The new vocabulary server maintained by ANDS replaces most of those functionalities.

The Governance page has been updated to reflect the Steering Committee, and the Contribute pages now direct users to GitHub and the Sorting Tool.

The Executive Summary of the Unified Astronomy Thesaurus.

The most current version of the UAT in SKOS and Excel format can be found at the UAT Github repository.

An incomplete comparison of the UAT with SPIE and IVOAT in an Excel spreadsheet. 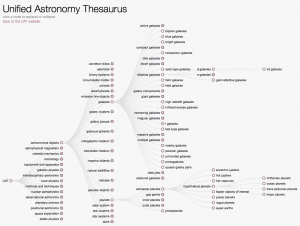 I’ve added a third way to view the thesaurus! It’s an interactive visual tool called a dendrogram, built using the D3 JavaScript library. You can click on the nodes for each term to expand or collapse it’s child terms. This allows you to see the over all structure of the thesaurus in a much more fluid and visual way than the hierarchical browser previously implemented.

You can find the new interactive and visual tool under the Thesaurus menu above, or by clicking on this link:

Over the last week I’ve added the ability to view the Unified Astronomy Thesaurus from the website. To start browsing through the terms, mouse over the Thesaurus button in the menu above.

We’re still working to improve these browsing methods and add additional functionality to the website.